A troublesome ‘list’ has been circulating on Facebook lately, variously taking on the shape of a meme, coffee mug or t-shirts. It’s meant as a defense of science in the face of post-truth Trumpianisms and of recent waves of media attention to anti-science activists and extreme deniers.

Here is the pic in question, in one of its many forms: 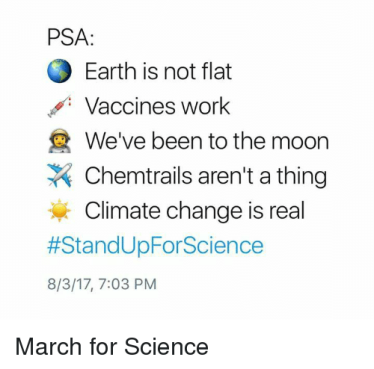 Posted by many esteemed friends and colleagues these past couple of weeks, it is an image that I struggle with each time I come across it. This repeated and deep discomfort lies in both inability to endorse it, (knowing why others are posting it and agreeing with them that there is a fight to be fought) and with the dynamics it creates (its frame pushes us into the wrong fight).

How we’re talking about science

In very broad brushstrokes, there is currently a growing tension between two poles. On one end, this is characterized by the dominance of technocratic knowledge, highly abstract knowledge based on calculations and a whole metrics instrumentarium, where data is closely entwined with modelling and simulation. This is the kind of knowledge that is embraced by major global institutions–from the World Bank to the WHO–and enabled by state-supported bureaucracies. It is how we know about world economies, the refugee crisis, global warming, epidemics and many other crucial issues. This kind of knowledge is held by the ‘elite experts’ we are supposedly tired of–to paraphrase some of the recent commentary to the Brexit and Trump’s election.  The other pole of this tension is the populist appeal to common sense and to the evidence of one’s eyes–imagine Trump speaking on an icy day and stating that we just have to look outside to see that global warming isn’t such as issue. This (and much worse) happens and gets broadly tweeted, reported and broadcast.

I wish this tension were a caricature, but it’s not, this is the repeated and dominant framing of discussions about science in the mainstream media.

(At this point, I should state that my own intellectual and professional investments as a science and technology studies scholar have been to explore the professional production of knowledge, to show the diversity of kinds of knowledge and the important variations in what experts are telling us, how they come to their conclusions,  what counts as evidence and how these claims are validated. So in no way am I dismissing the importance of expertise, on the contrary, a proper characterization of this kind of knowledge and of its metrics, is a crucial matter that can feed the necessary measures I describe below.)

First, it contributes to polarisation and simply isn’t going to help the place of science in the public discourse. If anything, it’s making it worse. This list is as much of a potshot as Trumps claims: look out the window. It is just an appeal to common sense, perhaps one that has a ‘rationalistic’ or ‘scientoid’ flavour to it. Furthermore, the ‘controversies’ the list refers to are highly diverse in their scope and nature, and in their social contexts. This list tars all kinds of objections by a diversity of groups with the same brush.

Second, I can’t help but yearn for sub-clauses in these statements. For example: Vaccines work, yes, most of the time for most people if they are properly manufactured, stored and administered, and only if we collectively embrace them, and while they do bring some risks in a very small number of cases, this risk should be weighed with the risk of not using vaccines.

The earth is not flat and we’ve known this in various parts of the world at different times, based on different kinds of research and evidence.

Chem trails have not been widely measured and neither have their purported effects at population level been documented.

The way to #StandUpForScience: grounded knowledge

I want to bring in these sub-clauses because they take us out of the potshot dynamic. Most importantly, they are a first step in getting some motion going. It’s essential for science and for public discourse to have a dynamic between the abstract and the particular, between expert and collective knowledge. Rather than potshots, we need circulation. I don’t long for a perfect, modernist cycle of interaction, but for modest moves between positions. We need a framing that leans towards interaction, translation, and conversation as an essential first step to grounded knowledge, to a science that matters and to a better public discourse on knowledge.

My recent reflections on the place of knowledge in politics and public debate have been inspired by the writings and lectures of Helen Verran, Paul Edwards, Anna Tsing, Kalpana Shankar, the recent exchange between Sismondo and Collins et al, starting in February 2017 in SSS.

← Learning to interface at the Groningen Energy Summer School 2017
What will bring about the energy transition? →